In 2009 The Fauxharmonic Orchestra held a worldwide contest to find the best new concerto. Brian Fennelly’s “Fantasia Concertante” for violin, cello and orchestra won the top prize. We’ve completed our recording of this evocative work, along with Duo Parnas, for whom the work was written. 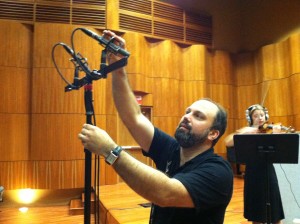 To make this hybrid recording we first prepared the orchestral parts. Dan Czernecki then recorded Duo Parnas playing their parts live in Albany, New York. Later we refined the orchestra part to better fit the soloists phrasing, sound and timing.

We combined the live recording of Duo Parnas and the Fauxharmonic Orchestra tracks to produce the final result.

Brian Fennelly (born 1937) studied at Yale with Mel Powell, Donald Martino, Allen Forte, Gunther Schuller and George Perle (M.Mus 1965, Ph.D. 1968). In 1968 he joined the Faculty of Arts and Science at New York University, from which he retired as Professor of Music in 1997. In addition to a Guggenheim fellowship, his awards include three fellowships from the National Endowment for the Arts and commissions from the Koussevitsky Foundation and Meet the Composer/Reader’s Digest as well as from the Hudson Valley Philharmonic and Pro Musica Chamber Orchestra. In 1997 he received a lifetime achievement award from the American Academy of Arts and Letters. 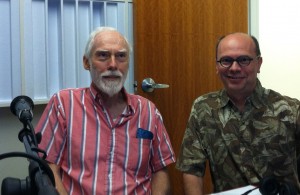 His music has been awarded prizes in many competitions, which include the Goffredo Petrassi Competition for Orchestral Music (1993), International Trumpet Guild Competition (First Prize, 1990), the Louisville Orchestra New Music Competition (First Prize, 1986), Shreveport Symphony Competition (1981), and the Premio Citta di Trieste (1981). Over a dozen of his works appear on CD, with orchestral and chamber music released on the New World, CRI, Pro Viva, First Edition, Capstone, and New Ariel labels. Orchestral releases include Fantasy Variations, In Wildness is the Preservation of the World, On Civil Disobedience, and A Sprig of Andromeda, the last three all Thoreau-inspired works.

Brian Fennelly’s music has been performed by several orchestras including the Rochester Philharmonic, American Composers Orchestra, and The Louisville Orchestra, as well as by chamber ensembles such as the American andEmpire Brass Quintets, and the Concord and Audubon String Quartets. His choral music has been sung by the Gregg Smith Singers and the New York Virtuoso Singers, among others. International performances include two at the Warsaw Autumn (Poland) and four at the ISCM world Music Days (Iceland, Israel, Belgium, and Canada), with recordings by The Louisville Orchestra, Polish Chamber Orchestra, Prague Radio Orchestra, Slovak Radio Symphony Orchestra, and the Polish Radio National Symphony.

Fennelly’s music is published by Margun Music (Boston): MMB Music, Inc. (St. Louis), Pro Nova (Munich), Ricordi (Milan), and American Composers Edition (New York). In addition to composing and teaching, he has been active as officer and board member in a number of music organizations; he also co-directs the Washington Square Contemporary Music Society, which he founded in 1976.

Fennelly resides in Kingston, New York with his wife Jacqueline, who played French horn with the Hudson Valley Philharmonic for many years. Liam Fennelly, a son from a previous marriage, is a viola da gamba player now living in Europe. 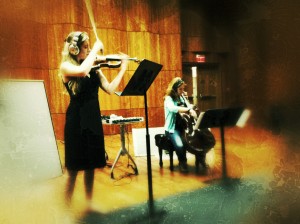 During the 2012-2013 concert season, duo parnas will debut as guest soloists with the Orchestre National des Pays de la Loire, performing seven concerts while on tour. They will also debut with the El Paso Symphony Orchestra. Previous appearances as duo soloists with orchestra include the New York String Orchestra under the baton of Jaime Laredo, the Hudson Valley Philharmonic conducted by Randall Fleisher, and the Albany Symphony Orchestra led by David Alan Miller, among many others.

Recording for Sheffield Lab, duo parnas has released two CDs and a third will be available Fall 2012. Parnas Double includes music by Handel-Halvorsen, Kodaly, Ravel, and Tcherepnin; Gare du Nord concentrates on music inspired by Parisian culture, with works by Martinu, Milhaud, Gliere, Fennelly, and Honegger; and, In Real Time will feature duos written by living composers Auerbach, Bolcom, Moravec, and Wuorinen, among others. Albany Records will soon release a collection of works by Brian Fennelly, including his double concerto, Fantasia Concertante, performed by duo parnas.

Madalyn and Cicely hold Artist Diplomas from Indiana University Jacobs School of Music, where they studied with Jaime Laredo and Sharon Robinson, respectively. Madalyn also holds an undergraduate degree in Music Industry and French, and will be completing a Masters at London’s Royal Academy of Music as a Marshall Scholar. Cicely will be completing her undergraduate degree at Cleveland Institute of Music as a full scholarship recipient. Madalyn and Cicely are the granddaughters of the legendary cellist Leslie Parnas.

Special thanks to Dan Czernecki of Classical Recording Service for engineering the soloists’ recording session in Albany, New York.