We worked on a film now with an interesting challenge:

An old opera recording from the 1930s is playing.  As the scene transitions, the music transforms from the old recording into a lush, new one.  How will we do it?

First, we took a recording from the 1950s (“Un bel di vedremo” from Madame Butterfly, sung by Renata Tebaldi) and made it sound like it was recorded in the 1920s:

Then we took out Renata Tebaldi’s voice:

and made a new orchestra part that very closely matched the old one:

We gave the film’s sound editor both recordings so she could make the transformation just exactly as she liked. 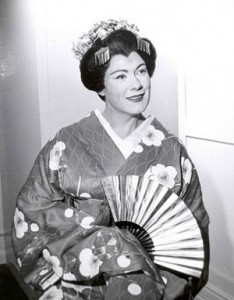 Meanwhile, just for fun, here is the version of the old Renata Tibaldi recording superimposed on the new orchestra track:

This won’t appear in the film, but we created this to make sure our new recording more or less matches the old one from start to finish.